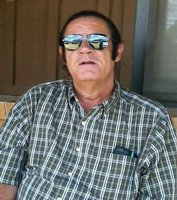 Paul Allen Bridges, age 60, of Magnolia died Tuesday, October 18, 2016 at Christus St. Michael Health System of Texarkana, TX. Mr. Bridges was born November 28, 1955 in Waldo, AR. He is the son of the late Joe Lee and the late Mable Ozell (Greene) Bridges. He married Mary Ruth Pittman. He was predeceased by his son, Anthony Bridges, brother, Jesse Bridges, and his ex-wife, Mary Ruth Pittman Bridges. Paul was an avid Razorback basketball fan, with a love that found its beginning when he played the game in Waldo and Village. He was a "Forever Elvis Fan" who loved his family and was happiest cooking and being around loved ones. He was a familiar face of the holidays serving the Salvation Army at El Dorado Walmart as a Bell Ringer, which he did with a fervor seldom seen among workers. He is survived by one son: Edward Bridges of El Dorado, AR; two sisters: Letha Hendricks and Frances Dowling both of Magnolia, AR; three grandchildren. Katie and Jacob Bridges and, Adam Hicks all of El Dorado, AR, numerous nephews, nieces, cousins and friends among whom is his longtime companion, Louise Dowling of Magnolia. A visitation honoring his life will be held from 11:00 am until 1:00 pm on Tuesday, October 25 at the Penecostals Of El Dorado, 2400 James Blvd, El Dorado, AR with Bro. James Fout, officiating. Burial will follow in Pate Cemetery, El Dorado, under the direction of Henderson Funeral Service. Online guestbook available at www.hendersonsmortuary.com