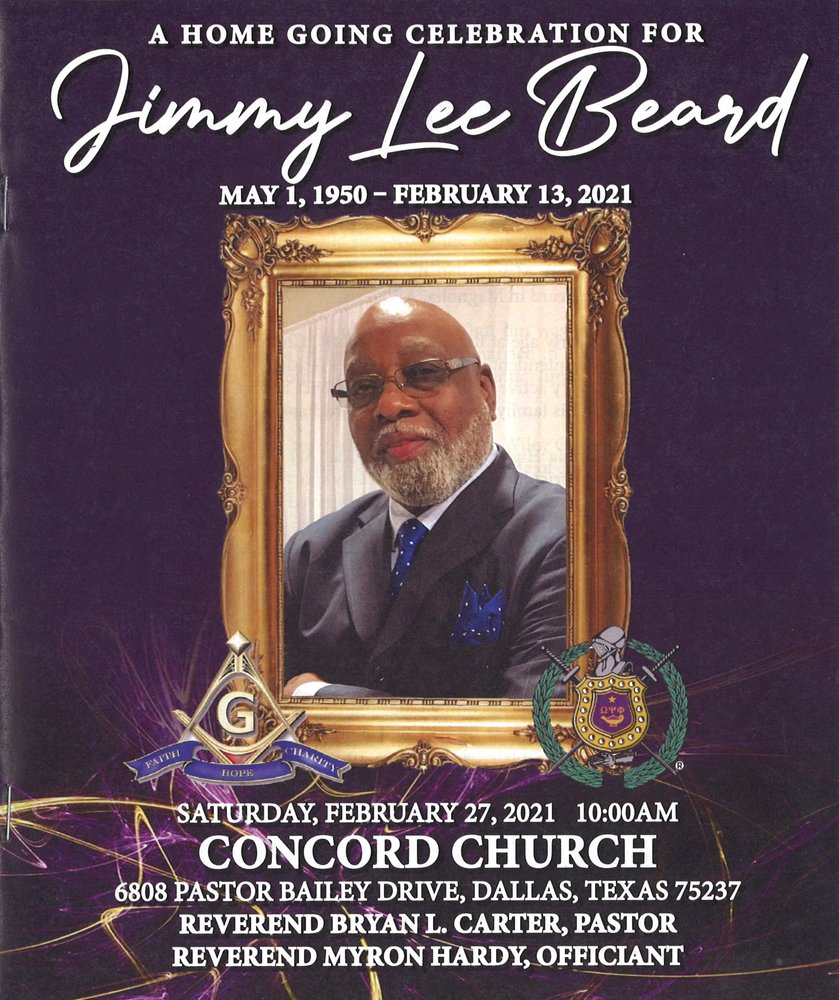 FOR YOUR INFORMATION ONLY - SERVICES ALREADY COMPLETED

On Saturday, February 13,202I, |immy Lee Beard a loving husband, father, brother, uncle,
and a friend wanted to let you know that his work here on earth is done. He received a calling
he could not refuse. He left detailed instructions for his wife and children to celebrate his
mission here on earth.
Jimmy Lee Beard (Jim) was born May l, 1950, the youngest of four children, born to the late
Willie B. and Viola George Beard in Magnolia, Arkansas.
Jim accepted Christ at an early age at the Mt. Olive Baptist Church in Magnolia and was
very active, serving as Superintendent of Sunday School, President of the Choir, and Youth
BTU Leader. Jim was also very active in the Columbia District Baptist Association, serving
in many capacities. He and his family later joined Concord Baptist Church, Dallas, Texas.
Jim graduated from Columbia High School, in Magnolia, Arkansas in 1968. He excelled
academically and in extra curriculum activities, especially sports. |im was a standout, a star
basketball player, so much so that after graduation he received a basketball scholarship to
Ouachita Baptist University in Arkadelphia, Arkansas. His basketball career took him to
Dallas Baptist Universitywhere he continued his academic ventures, excelling inbasketball,
earning him the privilege to play with a professional basketball team in Leon, Mexico in
1974. lim received a Bachelor of Applied Science (BAS) in Recreational and Political Science. He became a Charter
Member of the St. John Masonic Lodge #456, Stephens, Arkansas.

While attending Ouachita Baptist University in Arkadelphia, Arkansas he met and married Wanda Kay Harris in 1970
in Magnolia, Arkansas, to this union, 3 sons were born. He and his family moved to Fordyce, Arkansas where he was
employed with Phelps Dodge. He later moved his family to Dallas, Tþxas where he was employed for over 20 years as a manager at Chaparral Steel.
During Jim's employment in the Steel Industry, he mentored and assisted many in obtaining jobs. He believed in reachíng back and bringing those who  wished to come along with him as he forged up the ladder of success. |im retired in 2008 from
the Dallas Independent School District at Village Fair Alternative School. Jim had great
intellect and insight which fortified his opportunities, as an entrepreneur, with this came
ownership of a Williams Chicken Franchise in Corsicana, Texas, as well as Cofounder and
CEO of A Place Like Home.

Share Your Memory of
Jimmy
Upload Your Memory View All Memories
Be the first to upload a memory!
Share A Memory